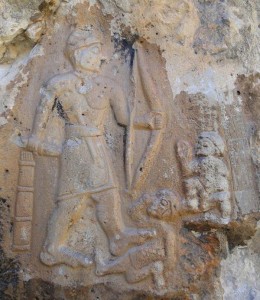 Interestingly, one of the wall murals found near the site shows what appreas to be a giant or King stepping on tiny men. All the more interesting then that there were reports of four 10 foot tall skeletons within this area, July of 2012. I say, NOT a coincidence.

Kalar, July 18 (AKnews) – The skeletons of four men at least 10 feet high, have been found near the district of Kalar, south of Kirkuk, which archaeologists believe date back thousands of years.

The discovery was made in the hills of Rahim in Rizgari city within the administrative territory of Kalar, where archaeologists have been digging around six weeks.

“We found a number of graves here. The skeleton men are so big and tall that are abnormal. These remains could be traced back thousands of years before Christ, “said Mohamed Ali, the official media of the Department of Archaeology Garmyan.

“We are now working on cleaning of graves. There are four of them. The height of men according to their skeletons is about 3 meters (about 10 feet), “Ali said,” are fascinating. ”

In addition to the graves and skeletons, found a series of ceramic works carved in the same place, according to Ali. “These bottles date back to about 4,500 years before Christ.”

Ali said that the age of the bottles was determined by archaeologists in the USA, Turkey and Jordan after they have been sent pictures of these items to them.”
RY / AKnews