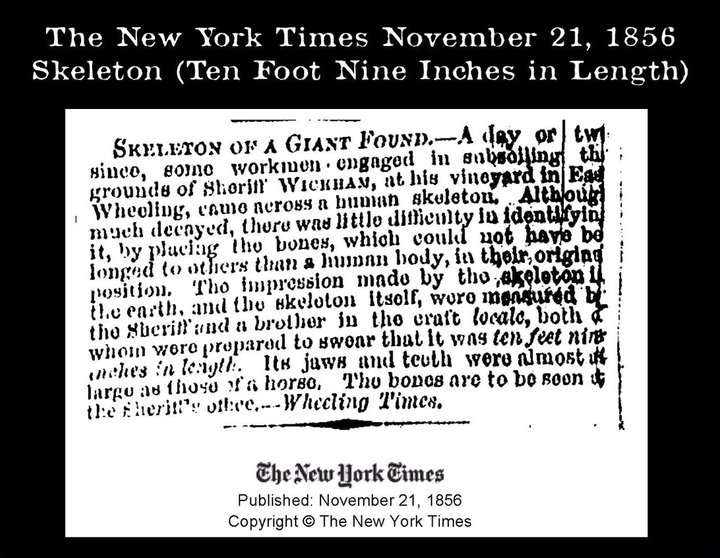 Skeleton of a Giant Found

– – A day or two since, some workmen engaged in subsoiling the grounds of Sheriff Wickham, at his vineyard in East Wheeling, came across a human skeleton. Although much decayed, there was little difficulty in identifying it, by replacing the bones. which could not have belonged to other than a human body, in their original position. The impression made by the skeleton in the earth, and the skeleton itself, were measured by the Sheriff and a brother in the craft locale both of whom were prepared to swear that it was 10 feet nine inches in length. Its jaws and teeth were almost as large as those of a horse. The bones are to be seen at the Sheriff’s office.-Wheeling times-

Aman, for being told the truth, thanks you the first time-votes you a bore the second-and quarrels with you the third.

In this article there are assurances by the first-hand viewers, “there was little difficulty in identifying it”. and “which could not have belonged to other than a human body, in their original position.” another strong confirmation is the public title as this was seen by a high member of law enforcement, the local sheriff. Another layer of certainty is the mentioning of the skeleton being measured. The sheriff and his brother were willing to swear that the skeleton was 10 feet nine, and its very unlikely it was wrongfully measured because they compare the teeth to the size of a horse. Horses were very common in the 1850’s so you bet your mortgage that the sheriff and his brother owned a horse. The bones were then taken to the sheriff’s office to be seen by the public.