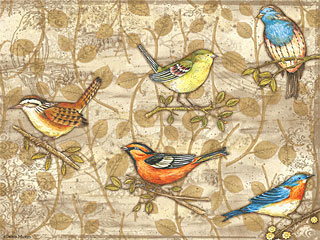 Songbirds in the US are getting smaller

A study has been conducted on songbirds and the result of the study of almost half a million songbirds belonging to over 100 species resulted in what we would expect: They are gradually over time devolving. The birds are becoming lighter and losing wing lengt

h. This is only a 50 year study and of course mainstream science is using it as another environmental money-grab.

In Biology there is a promotional idea that animals tend to get smaller in warmer climates, however there is no evidence that this change is harmful or can be connected to their shrinking size.

This idea is known as the Bergmann’s Rule.

The Bergmann Rule is demonstrated when animals living at high altitudes or in more Northern areas are slightly larger than those who are not.

Larger animals get to chose where they sleep first, they get the higher safer position, they are more durable and able to handle the colder climates than smaller adults.
Read about the 3 words of survival: (location location location)
Animal Real Estate
http://www.facebook.com/notes/greater-ancestors-world-museum/animal-realestate/172255259493618
Climate change has no affect on species. There is a separation between the individual and the cells of that species when it comes to passing on genetics. The environment is powerless to affect the direction of change. The idea that climate change is the mechanism is an appeal to the belief in a “unified-nature” and the belief of pantheism.
honey-climate-change-is-shrinking-the-species-not
http://www.facebook.com/notes/greater-ancestors-world-museum/honey-climate-change-is-shrinking-the-species-not/186581364727674