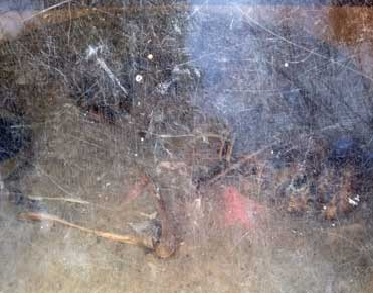 The Sheboygan Indian Mound Park, a natural and historic resource, is the sacred burial ground of the Native Americans who lived over 1,000 years ago and built these effigy mounds in deer, Panther, conical, and linear shapes.

[Jara Malchow, 04/23/2015]
Sign near the Open Mound Exhibit says: “The skeleton is composed of replica skeletal material.” Real Native American skeletons exhibited in tourist attractions were repatriated long ago by federal decree; this display dates back to 1968.
Here we have a mass of moundbuilder skeleton replicas, (kudos to the people that preserved this history) albeit under scratched glass. So we know the skeletons id exist but were taken. Millions of skeletons went missing in the US who was wiping out the history? NAGPRA / Smithsonian? that’s who.
Chris L Lesley