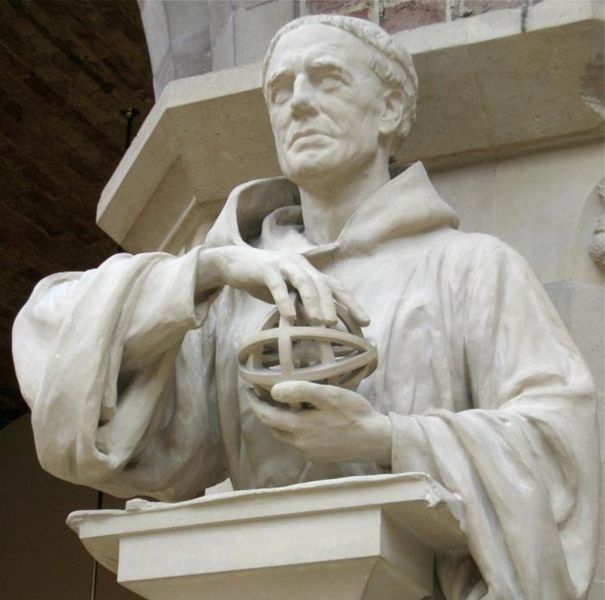 Roger Bacon, (Doctor Mirabilis,  (“wonderful teacher”), was an English philosopher and Franciscan friar who placed considerable emphasis on study through empirical methods. He is sometimes credited, mainly starting in the 19th century, as one of the earliest European advocates of the modern scientific method. More recent evaluations emphasize that he was essentially a medieval thinker, with much of his “experimental” knowledge obtained from books.

Roger Bacon.  The “Admirable Doctor,” the greatest philosopher of the Middle Ages, was born in Somersetshire, England, about 1214, and he was educated at Oxford and Paris. He joined the Franciscan (mendicant) Order, and his ecclesiastical situation never conflicted with his real scientific mindset.

He was an avid proponent of observation and experiment as the basis of deduction, and never ceased urging the study of original sources and texts as the basis for gaining any sound knowledge.

Pope Clement IV, hearing of his scientific achievements, asked him to write out and send a summary of what he knew; in an incredibly short time.

In 1268 he wrote an encyclopedic summary of all known science. It is filled with original experiments and acute deductions in mathematics, physics, and other disciplines. He addressed the following portion of his work to William of Paris, which eventually went to the Pope. Here are a few excerpts from some of the subtopics in this lengthy Latin treatise (rendered by an anonymous translator into English from a French work published in 1899) on

“The Non-Existence of Magic”:

“I will first tell of the wonderful works of art and nature, that I may afterwards assign the causes and manner of them, in which there is nothing magical, that it may be seen that all magic power is inferior to these works, and worthless. And first for the quality and reason of art alone. For instruments of navigation can be made without men as rowers, so that the largest ships, river and ocean, may be borne on, with the guidance of one man, with greater speed than if full of men.(Automated ships)

Also carriages can be made so that without an animal they may be moved with incalculable speed; as we may assume the scythed chariots to have been, with which battles were fought in ancient times.(automobiles)

Also instruments for flying can be made so that a man may sit in the middle of the instrument, revolving some contrivance by which wings artificially constructed may beat the air, in the manner of a bird flying. (aircraft)

“Instruments can also be made for walking in the sea or rivers, down to the bottom, without bodily peril. (diving gear)

For Alexander the Great used these that he might view the secrets of the ocean,

according to what Ethicus the astronomer narrates. These things were done in ancient times, and done in our own, as is certain, unless it may be the instrument for flying, which I have not seen, nor do I know any man who has seen;

but I know that the wise man who planned this device completed it.

And such things can be made almost infinitely,(completed flying machine)

as bridges across rivers without pillars or any other support, and machines, and unheard of devices.” (quantum levitation bridges) and more.

“V. Of Experiments in Artificial Sight”

“Glasses can be so constructed that things placed very far off may appear very near, and vice versa; so that from an incredible distance we may read the minutest letters, and number things however little, and make the stars appear where we will.

For this it is believed that

Julius Caesar, on the shore of the sea in Gaul,

discovered through huge glasses the disposition and sites of the castles and towns of Great Britain.

“But there is a sublimer power of construction, by which rays may be drawn and collected through various shapes and reflections to any distance we wish, so far that

any object may be burned;

for burning glasses acting forward and backward attest this, as certain authors teach in their books. (Lasers)

And the greatest of all constructions and of things constructed is that the skies may be depicted according to their longitudes and latitudes, in corporal figures, as they are moved in their daily motion; and these things are worth a kingdom to the wise man. These then suffice for examples of constructions, however infinite a number of others may be put forward meantime.” (Astronomy)
Bacon is often considered the first European to describe a mixture containing the essential ingredients of gunpowder. Based on two passages from Bacon’s Opus Maius and Opus Tertium, extensively analyzed by J. R. Partington, several scholars cited by Joseph Needham concluded that Bacon had most likely witnessed at least one demonstration of Chinese firecrackers, possibly obtained with the intermediation of other Franciscans, like his friend William of Rubruck, who had visited the Mongols. The most telling passage reads:

“We have an example of these things (that act on the senses) in [the sound and fire of] that children’s toy which is made in many [diverse] parts of the world; i.e.
a device no bigger than one’s thumb.
From the violence of that salt called saltpetre [together with sulphur and willow charcoal, combined into a powder] so horrible a sound is made by the bursting of a thing so small, no more than a bit of parchment [containing it], that we find [the ear assaulted by a noise] exceeding the roar of strong thunder, and a flash brighter than the most brilliant lightning.”
(gunpowder)

I would like to add that there is reasonable historical evidences for the same technology from the past. Mankind has done all of this before, kingdoms advance, and kingdoms fall, and one cultures technology has no purpose in another’s. Out of the technologies chronicled the one thing that Roger Bacon does not see is “Ancient Aliens”. ~Chris L Lesley