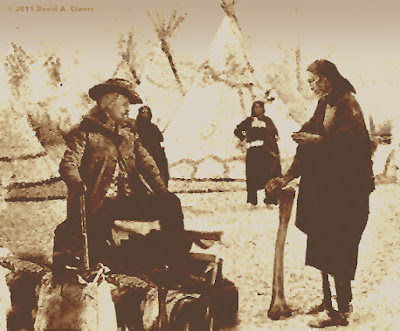 Illustration by David A. Claerr

BUFFALO BILL AND THE GIANT BONE

This is the account of the most famous, most weel-known entertainer of his time. His credibility and endorsed account should not be taken lightly or flippantly dismissed.

“While we were in the sand hills, scouting the Niobrara country, the Pawnee Indians brought into camp some very large bones, one of which the surgeon of the expedition pronounced to be the thigh-bone of a human being. The Indians claimed that the bones they had found were those of a person belonging to a race of people who a long time ago lived in this country; that there was once a race of men on the earth whose size was about three times that of an ordinary man, and they were so swift and powerful that they could run along-side of a buffalo, and taking the animal in one arm could tear off a leg and eat the meat as they walked.”

Buffalo Bill and the Giant Bone / The Life of Hon.Willian F. Cody; known as Buffalo Bill, The famous hunter, scout, and guide. ​An autobiography 1879.