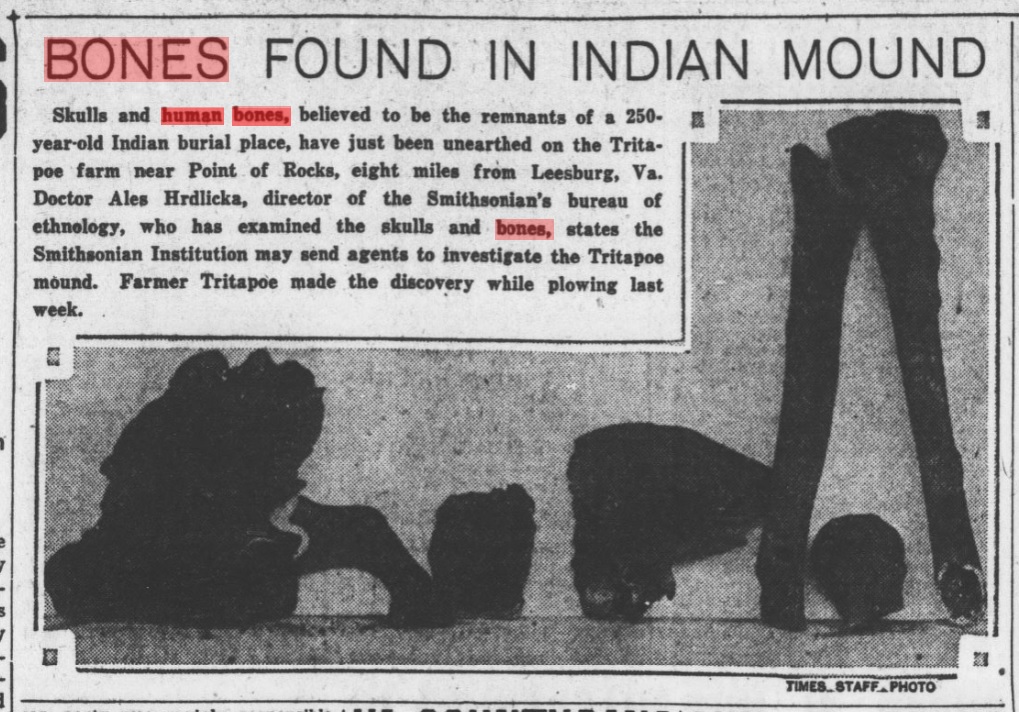 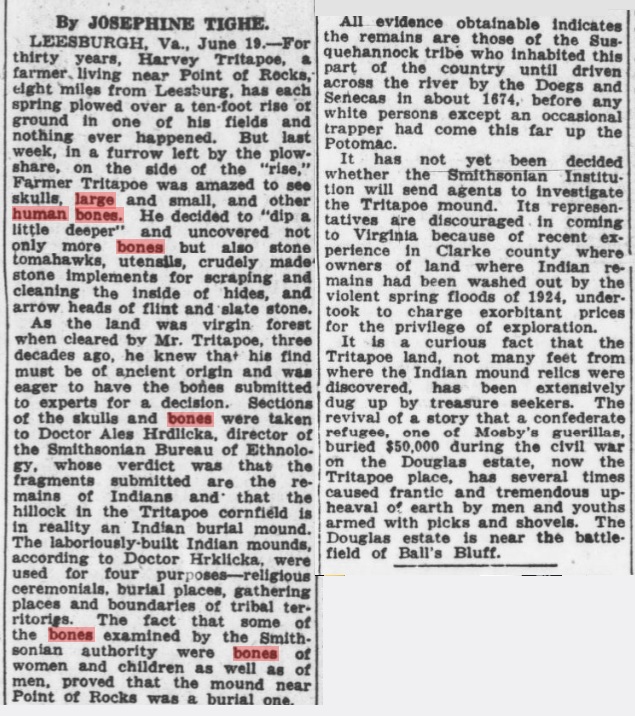 By JOSEPHINE TIGHE.
LEESBURGH. Va., June 19.—For
thirty years, Harvey Tritapoe, a
farmer, living near Point of Rocks,
eight miles from Leesburg, has each
spring plowed over a ten-foot rise ot
ground in one of his fields and
nothing ever happened. But last
week, in a furrow left by the plow
share, on the side of the “rise,”
Farmer Tritapoe was amazed to see
skulls, large and small, and other
human bones. He decided to “dip a
little deeper” and uncovered not
only more bones but also stone
tomahawks, utensils, crudely made 1
stone implements for scraping and
cleaning the inside of hides, and
arrow heads of flint and slate stone.
As the land was virgin forest
when cleared bv Mr. Tritapoe, three
decades ago, he knew that his find
must be of ancient origin and was
eager to have the bofies submitted
to experts for a decision. Sections
of the skulls and bones were taken
to Doctor Ales Hrdlicka, director of
the Smithsonian Bureau of Ethnolo
gy, whose verdict was that the
fragments submitted are the re
mains of Indians and* that the
hillock in the Tritapoe cornfield is
in reality an Indian burial mound.
The laboriously-built Indian mounds,
according to Doctor Hrklicka, were
used for four purposes—religious
ceremonials, burial places, gathering
places and boundaries of tribal ter
ritorigs. The fact that some of
the bones examined by the Smith
sonian authority were bones of
women and children as well as of
men. proved that the mound near
Point of Rocks was a burial one.
AU evidence obtainable indicates
the remains are those of the Sus
quehannock tribe who inhabited this
part of the country until driven
across the river by the Doegs and
Senecas in about 1874, before any
white persons except an occasional
trapper had come this far up the
Potomac.
It has not yet been decided
whether the Smithsonian Institu
tion will send agents to investigate
the Tritapoe mound. Its represen
tatives are discouraged in coming
to Virginia because of recent ex
perience in Clarke county where
owners of land where Indian re
mains had been washed out by the
violent spring floods of 1924, under
took to charge exorbitant prices
for the privilege of exploration.
It is a curious fact that the
Tritapoe land, not many feet from
where the Indian mound relics were
discovered, has been extensively
dug up by treasure seekers. The
revival of a story that a confederate
refugee, one of Mosby’s guerillas,
buried 350,000 during the civil war
on the Douglas estate, now the
Tritapoe place, has several times
caused frantic and tremendous up
heaval of earth by men and youths
armed with picks and shovels. The
Douglas estate is near the battle
field of Ball s Bluff.