Large Skull from the Latro Mound in Louisiana. 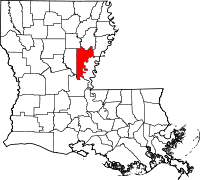 Mr. Gaspard Cusachs exhibited the series of royal ordi-
nances relating to Louisiana from 1725 to 1764, in perfect
preservation.

Professor Beyer reported that Dr. Rudolph Matas, the
highest local authority on craniology, advised that the Larto
mound skull, submitted to him for examination, be forwarded
to the Scientific Societies of Paris, for their judgment upon it.
Full text here:

TRACING A BYGONE RACE
Prof. Beyer’s explorations in the Louisiana Mounds
Evidence of the Existence of a Prehistoric Race-They Were Big Men.  The Skeletons Measuring More Than Six Feet, but Apparently Not Warlike-The Larto Mounds-Excavations Not Complete.

New Orleans, July 29.–Prof. George Beyer, curator of the Tulane Museum and Professor of Natural History in that institution has returned from his investigation of the Indian mounds of Catahoula, which he has been conducting under the joint auspices of the university and the Louisiana Historical Society.  The excavations, as far as they have gone, have been eminently successful.  Prof. Beyer secured a large number of valuable archaeological specimens for the museum, and brought out some interesting facts about the Louisiana aborigines; but the work is by no means complete, and Prof. Beyer will soon go back to Catahoula to continue his explorations, which, it is hoped, will solve some of the important points concerning the mound builders not heretofore known.

The mounds explored are four in number, recently discovered in Lake Larto, in the swamp country of Catahoula.  The mounds were thoroughly examined, but not content with this, Prof. Beyer explored the surrounding country and discovered scores of mounds throughout the swamp region of Catahoula and neighboring parishes.  The town of Troyville is built over a score of these mounds, and a large number of the houses in that section are erected on mounds which render them safe against overflow.  The mounds are not high, like those in Ohio and the central Western States, and the reason why but little has been hitherto known concerning them is because the people living in the swamps were not aware that they were erected by human hands, but believed them to be natural high places in the swamp created by drift, etc.  The Lake Larto mounds, perfect circles with connecting causeways between them, were so clearly artificial as to attract the notice of the people living in the neighborhood.  The other mounds are more irregular in outline, or more hidden away in the swamps, and little or nothing has hitherto been known of them.  They are larger than the Larto mounds, and may disclose more important relics.

The mounds excavated have yielded a number of skeletons, crockery, arrow heads, mortars and drills.  They show that the mound builders were of kindred origin to the Indians, but that they lived and died in the Louisiana swamps in pre-Columbian times.  The early French and Spanish settlers found no people living in these swamps, which before the days of houses extended from the Sicily (Island) Hills to those east of the Yazoo Valley, including a region of 10,000 to 12,000 square miles.  The mounds were evidently erected as a protection against the high water of the Mississippi, which converted this vast region into a lake in olden times, and, in old days, must have appeared to be islands.When not a lake, the country was a swamp, which an enemy would have found it difficult to penetrate.  The mound dwellers were large in size, many of the skeletons being over six feet high, and were evidently a powerful race, for the number of arrow heads and tomahawks show them to have been ill supplied with arms.  The arrow heads, of a peculiar white flint, came from some far distant place, probably from western Texas or New Mexico.  All the indications are that these people were a semi-civilized tribe, more advanced than the Indian tribes of the eastern United States.  They had moved east from Mexico, and had finally been forced to seek refuge in the Louisiana swamps from the more savage and warlike Indians around them.

The construction of the Larto mounds recalls the city of Mexico as Cortez saw it.  They were once probably in the lake–they are now upon its very border, and it has sensibly shrunk in area within historical times–and were connected with each other by means of causeways, as at Mexico.  What style of habitation was built on them it is impossible to say, for there are no relics save of ashes.  The life of the people is easily told from their utensils.  They were fishermen, rather than hunters, and used nets to catch their fish.  They must have lived on these islands for centuries, for the soil and layers of ashes and fish bones prove this.  When they died or how they died is not known; nor was there any tradition among the Indians concerning the swampers when the French came to Louisiana two centuries ago.

Whether the further explorations to be made will reveal the identity and story of these aborigines remains to be seen.  It will only then be possible to determine whether these swamp dwellers were the original inhabitants of the country, driven out by the Indians, or whether they came in later.  What light these excavations will shed on archaeology and aboriginal history remains yet to be seen.

you can also find information here:

The Mounds of Lousiana by Prof. George Beyer The Larto Group