to Unknown Once Lived in Wisconsin.

Special to the New York

iscovery of several skeletons of human beings while excavating a mound at Lake Delavan indicates that a heretofore unknown race of men once inhabited southern Wisconsin. Information of the discovery was brought to Madison to-day by Maurice Morrisay, of Delavan, who came here to attend a meeting of the Republican State Central Committe. Curator Charles E. Brown of the State Historical Museum will investigate the discoveries within a few days. Upon opening one large mound at Lake Lawn farm, eighteen skeletons were discovered by the Phillips Brothers. The heads presumably those of men, are much larger than the heads of any race which inhabit America to-day. From directly over the eye sockets, the head slopes straight back and the nasel bones protrude far above the cheek bones. The jaw bones are long and pointed, bearing a minute resemblance to the head of a monkey. The teeth in the front of the jaw are regular molars. Lake Delavan

There were also found in the mounds the skeletons, presumably of women. which had smaller heads, but were similar in facial characteristics. The skeletons were imbedded in charcoal and covered over with layers of baked clay to shed water from the sepulchure. 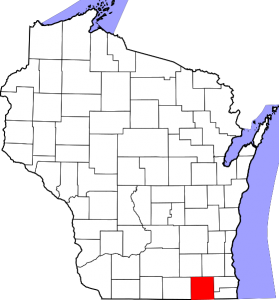 Today, 18 skeletons of a “hitherto Unknown race were found in a mound at Lake Delavan in southern Wisconsm The skulls of the skeletons (those which were
presumed to be the males) were unusually large. The various lengths of the skeletons Uncovered were not revealed. Lake Delavan[THE NEW YORK TIMES MAY 4, 1912] 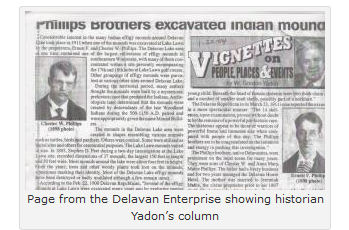 Here is one of the articles on the Phillips brothers doing the excavation, in which he refers to the people of these skeletons as being a “powerful prehistoric race.”

Linda Godfrey writes: “However, on a recent visit some friends and I were allowed to look through the files, where I found

an old newspaper clipping of a burial dig from The Milwaukee Journal, date unknown. This one (see scan, left, of the copy the museum made for me of the newspaper clip) revealed a skeleton with a truly strange, enlarged and weirdly shaped skull that was unearthed in Kletzsch Park along the Milwaukee River, probably in the 1930s. The photo includes the silhouette of a director of anthropology at the Milwaukee Public Museum, W.H. McKern.” . . .
Lake Delavan is in Walworth county.