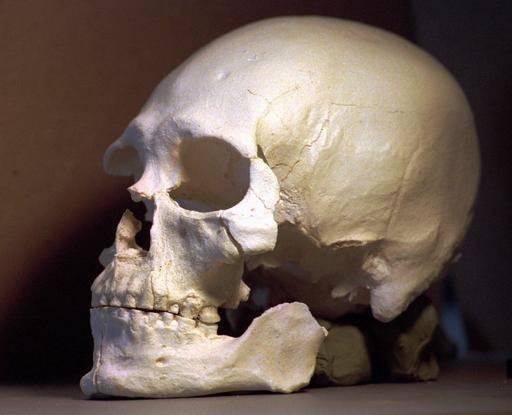 FILE–A plastic casting of the skull of “Kennewick Man” is shown in this July 24, 1997 file photo, in Richland, Wash. A federal judge has reactivated a lawsuit over a 9,300-year-old skeleton and questioned a Justice Department argument that any ancient skeleton by definition is that of a “Native American.” U.S. Magistrate John Jelderks Wednesday, questioned the department’s position that any human remains or artifacts that pre-date Christopher Columbus’ arrival in the New World automatically is considered “Native American.” After the government lawyers confirmed their definition, Jelderks told lawyers for five tribes who claim the ancient remains known as “Kennewick Man” as their ancestor to consider whether they agree with the government’s definition because it “might have implications beyond this case.” (AP Photo/Elaine Thompson, File)