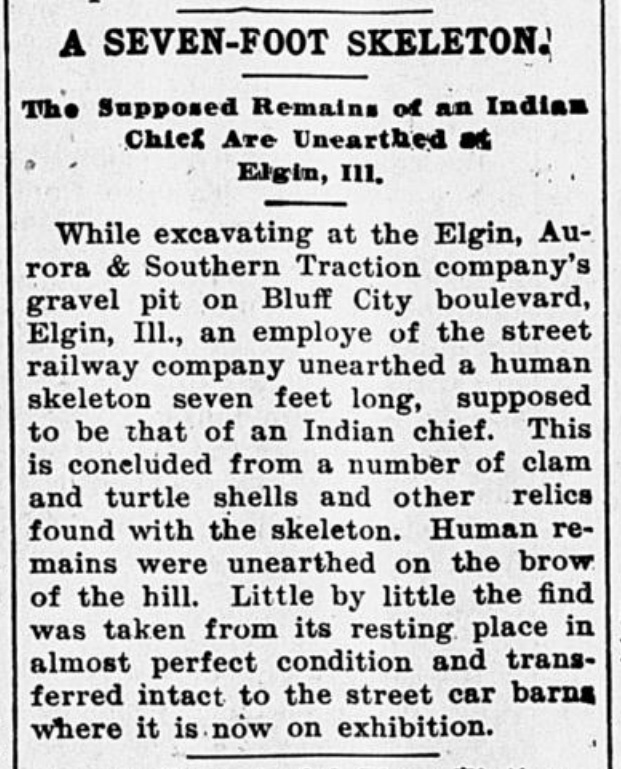 Tb« Supposed Remains of am India*
ChleX Are Unearthed a£
EAglm, 111.

While excavating at the Elgin, Au
rora & Southern Traction company’s
gravel pit on Bluff City boulevard,
Elgin, 111., an employe of the street
railway company unearthed a human
skeleton seven feet long, supposed
to be that of an Indian chief. This
is concluded from a number of clam
and turtle shells and other relics
found with the skeleton. Human re
mains were unearthed on the brow
of the hill. Little by little the find
was taken from its resting, place in
almost perfect condition and trans
ferred intact to the street car barns
where it is now on exhibition.
Troth More Awful Than floMoi.
The ingenious Mr. Zola has written
many stories dealing with the secret
life sometimes led by eminent respect
ability, but he never has portrayed
anything more strange and shocking
than the spectacle of a man of ad
vanced years, a man of eminence, the
inheritor of a great name, the recipient
of trust and honor at the hands of his
country, slain in a low saloon quarrel
over a woman. Imagination, says the
Chicago Chronicle, never has been able
to rivgl the queer turn of fttctl.