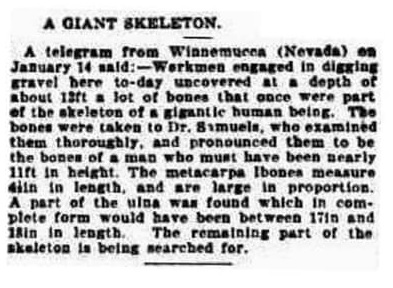 A telegram from Winnemucca (Nevada) on January 14 said:- Workmen engaged in digging gravel here today uncovered at a depth of about 12ft a lot of bones that once were part of the skeleton of a gigantic human being. The bones were taken to Dr. Samuels, who examined them thoroughly, and pronounced them to be the bones of a man who must have been nearly lift in height. The metacarpa bones measure 4 1/2 in length, and are large in proportion. Apart of the ulna was found which in complete form would have been between 17in. and 18in. in length. The remaining part of the skeleton is being searched for. ​