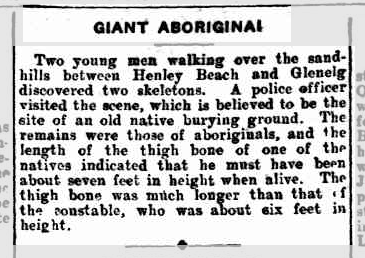 Two young men walking over the sand hills between Henley Beach and Glenelg discovered two skeletons. A police officer visited the scene, which is believed to be the site of an old native burying ground. The remains were those of aboriginals, and the length of the thigh bone of one of the natives indicated that he must have been about seven feet in height when alive. The thigh bone was much longer than that of the constable, who was about six feet in height.