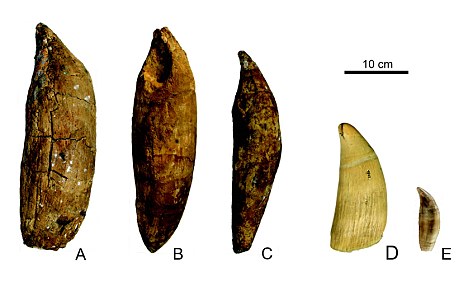 NATIONAL PICTURES
EMBARGOED until 30/6/10 19.00gmt
A NEW species of ‘killer’ sperm whale with 14ins teeth that roamed the Prehistoric seas more than 12 million years ago has been discovered by scientists.
The fossilized skull and jaw of the gigantic creature, which was over 43ft long with a ten foot head and huge teeth that ripped prey to shreds, were found off the coast of Peru.
The fictional Moby Dick was a sperm whale and the new species Leviathan melvillei, which was driven to extinction by climate change, has been named in honour of Herman Melville, the author of the classic novel
Pic shows: Three lower teeth (a,b,c) of Leviathan melvillei compared to teeth of the modern sperm whale Physeter macrocephalus (d) and the modern killer whale Orcinus orca (e).