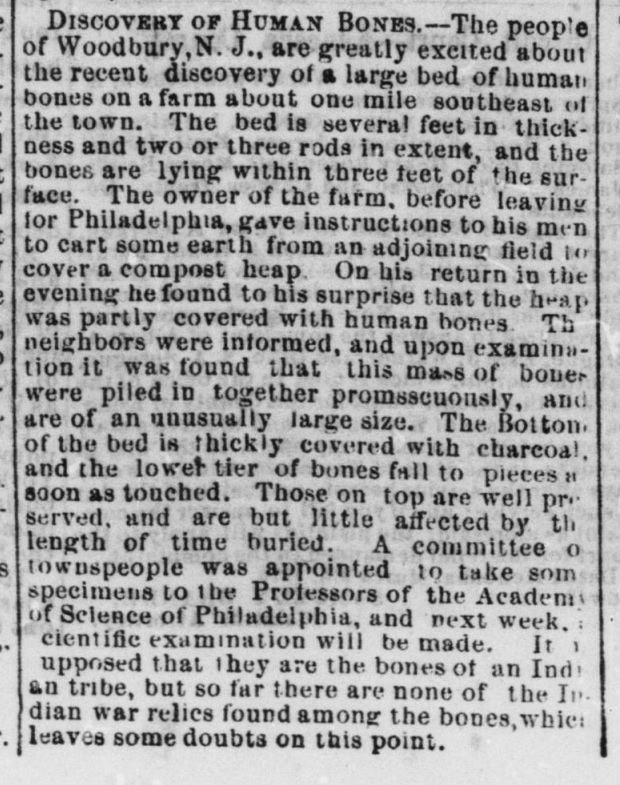 Discovery of Human Bones.
—The people of Woodbury, N. J., are greatly excited about the recent discovery of a large bed of human bones on a farm about one mile southeast <>l the town. The bed is several feet in thickness and two or three rads in extent, and the bones are lying within three feet of the surface. The owner of the farm, before leaving lor Philadelphia, gave instructions to his m< nto cart some earth from an adjoining field i<> cover a compost heap On his return in the evening he found to his surprise that the h»-st. was partly covered with human bones Th neighbors were informed, and upon examination it was found that this of bonei were piled in together promiscuously, am; are of an unusually large size. The Bottom of the bed is thickly covered with charcoal,
and the lowef tier of bones fall to pieces a soon as touched. Those on top are well prserved, and are but little affected by th length of time buried. A  committee o townspeople was appointed to take som specimens to the Professors of the Academ of Science of Philadelphia, and next week. cientific examination will be made. It i upposed that they are the bones of an Ind
an tribe, but so far there are none of the Indian war relics found among the bones,whies leaves some doubts on this point.