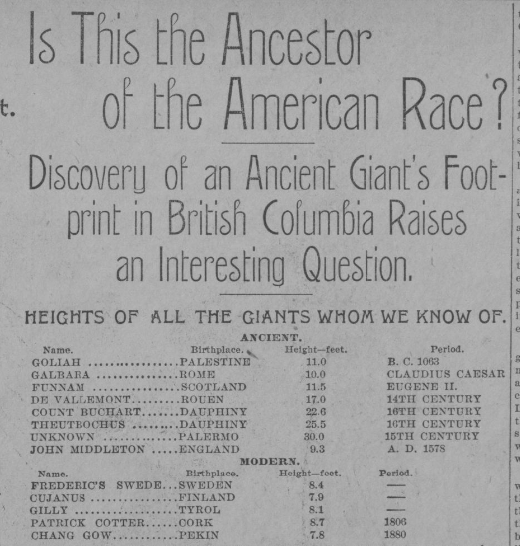 Is This the Ancestor of the American Race?

Discovery of an Ancient Giant’s Footprint in British Columbia Raises an Interesting Question.

HEIGHTS OF ALL THE GIANTS WE KNOW OF.

Dispatches from Victoria, British Columbia, announce the discovery of a series of gigantic footprints in that colony. They are apparently made by a human being,and, if so, it is prima facia evidence of the existence of a race of prehistoric giants on the Pacific Coast.

The Sunday Journal has made telegraphic inquiries concerning the discovery, and has many additional details. No doubt exists in the minds of those who have seen the Impressions that they are of human making, but there is as yet no reliable scientific verdict on the subject. The
Provincial History Society has already begun an Investigation.
In any case the discovery is one of great interest. It will probably arouse a sharp discussion among archaeologists. If the prints are proved to the satisfaction of the investigators to be those of a living creature, the question will remain to be decided whether it was human or not.

Anything concerning the early history of the human race arouses great and natural curiosity. One would like to know whether his prehistoric ancestors were great and terrible creatures or small and apelike ones. If they were small how could they have lived almost unarmed among the huge and
fierce beasts which then abounded on the earth. If there are pigmies to-day, compared to whom men of the bigger races are giants, why should there not have lived thousands of years ago giants compared to whom the biggest men to-day are pigmies?
Man, the last comer on the earth, is the animal concerning whose early history least is known. The natural history of some animals can be traced for countless ages, but the bones-of man are very perishable andare remarkable if they have an antiquity of two thousand years. For these and many other reasons the report from British Columbia deserves all possible attention.
The footprints were found on the island of Victoria, near the town of Quatsino, on the west coast/ Their discoverer was John L. Leason, a storekeeper of the town, and a man of intelligence. He reported his find to Captain Foot, of the steamer Mischief, who repeated his account to the members of the Provincial History Society. They were satisfied of its interest and importance, and a party was sent out to make
an investigation.
It appears that Leason was walking at some distance from the town when his curiosity was aroused by a strange depression in a large flat rock that lay before him. He was at the time at the foot of a mountain.
The depression at once suggested a human foot, but it was of enormous size. There was a well marked hollow where
the heel would have been, and a very faint depression indicated the arch of the foot. The ball of the big toe and the rest of the forward part of the foot were plainly to be seen. It is to be remembered that no other animal has an arched foot like that of man.
Leason Immediately proceeded to measure the print, and found that it was twenty nine Inches in length. Its greatest depth was four Inches. Fascinated by his discovery, he carefully examined the vicinity.At first he saw nothing which he could connect with the print, but after a few minutes he came upon another, almost identical. It was nine feet away from the first. This apparently was the length of the stride, which the giant had been in the habit of taking.
Following the direction indicated by these two prints, Leason found a number of others. They came to an end abruptly,
which was not surprising, for their surroundings must have undergone tremendous changes since they were made. The mountain itself may have come into existence in that time.
It is not surprising that footprints should have been preserved for so many ages. They may have been made in soft mud, which subsequently hardened and was then burled in the earth by volcanic action, and there turned Into stone and preserved from Injury until another volcanic disturbance brought them to daylight again. A large part of the knowledge of animals of early geological periods has been obtained from imprints left by them in this way.
Leason, it Is said, has already set to work to chisel out the first footprint which he found. He intends to Insure public recognition as its discoverer.
The existence of prehistoric giants on this continent has already been the subject of scientific discussion. The most important and interesting discovery tending

held close and numerous companionship with the mammoth, against which there is the burden of natural history proof, or that the stone men of the Nevada plain had been tracking down the gigantic beast to give him battle for food and had come upon their quarry here.
The bones, despite their condition of decay, had given a fair idea of the huge bulbs of the mammoth, but these spoor furnished an object lesson of bulbs that was even more powerful. The prints were from twenty-nine to thirty-four inches in diameter?the feet of an African elephant measuring from twelve to sixteen inches in diameter?and where the great, hairy pachyderm had trodden the clay had risen in ridges a foot high.
Here, then, the tree or cave men, with their stone axes or obsidian-tipped arrows, had brought the mastodon to bay, and it would not need a great flight of the

imagination to see the conflict between the men and beast. Nor, with the bones in such near neighborhood, would it need very much more imagination to see how the battle ended.
A strange addition to the actual realism of the scene is furnished by the “testimony of the rocks themselves.” Somewhat ahead of the mass of tracks around the centre of the hunting scene are found other prints of the big wading birds before alluded to. These show how the long-legged hunters of the pool first ran swiftly from the scene, and then, from the gradual shortening and deepening of the clawmarks, how the big birds left the earth
and took wing, frightened from the salt marshes where they had been feeding by the rush and yells of the stone men and the trumpeting of the .hunted mastodon.
Man, when he appeared on the earth, had a great many unpleasant neighbors, and had he been the size indicated by the British Colombian, footprint, he would have had plenty of opportunity to exercise his powers
In combat. Among the animals then living were the hairy mammoth, which was much larger than the elephant, the woolly rhincoceros, 1 the giant hippopotamus, as well as tigers, hyenas and bears of great size and ferocity.
The climate of the whole world was much colder, for the woolly pachyderms extended as far as the south of France. A remarkable similarity between the weapons and implements of primitive man has been noted all over the world. The stone hammers, axes and so forth are alike in Europe, Asia and America. From the remains of men of the stone age found in France it is concluded that they had massive bones, long and flat feet, comparatively short arms and long forearms, with powerful muscles, greatly developed jaws, widely opened nostrils and were of unbridled passions. Professor Broca found
the thigh bones in their width approaching those of the highest ape and a remarkable transverse flattening of the tibia. The ascending branch of the lower jaw was very wide, and the cranial capacity equal to that of high races of the present day. Another archaeologist, M. Lartet, says that the man
of the stone a^e lived without fruits, was essentially preduceous and carnivorous, and eater of raw flesh and a cannibal.
There is no scientific evidence to disprove the theory >that gigantic races of men lived on the earth in the days of its infancy. The traditions of the most ancient of civilized peoples contain strong testimony that there
were giant races. 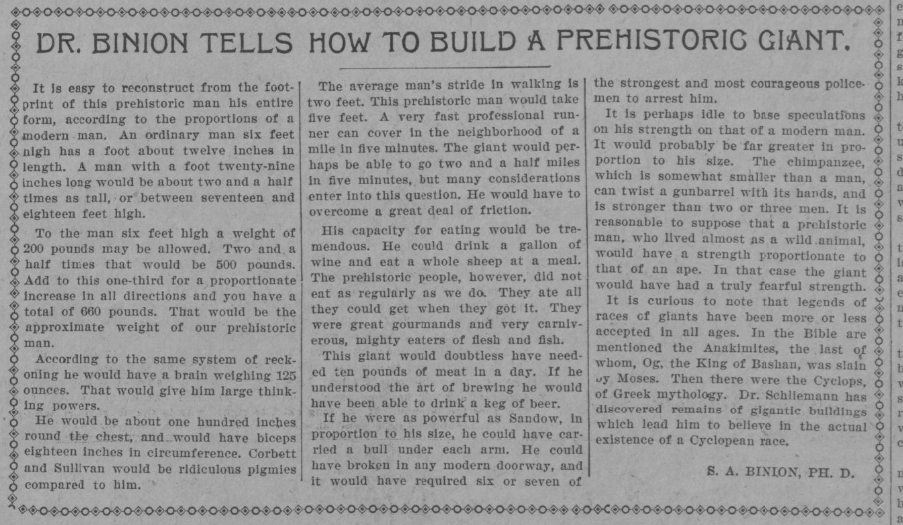 HOW TO BUILD A PREHISTORIC GIANT.

The average man’s stride in walking Is two feet. This prehistoric man would take five feet. A very fast professional runner can cover in the neighborhood of a mile in five minutes. The giant would perhaps be able to go two and a half miles in five minutes, but many considerations enter into this question. He would have to overcome a great deal of friction. Its capacity for eating would be tremendous. He could drink a gallon of wine and eat a whole sheep at a meal.
The prehistoric people, however, did not eat as regularly as we da They ate all they could get when they got it. Theywere great gourmands and very carniverous, mighty eaters of flesh and fish.
This giant would doubtless have needed ten pounds of meat in a day. If he understood the art of brewing he would have been able to drink a keg of beer.
If he were as powerful as Sandow, in proportion to his size, he could have carried a bull under each arm. He could have broken in any modern doorway, and it would have required six or seven of the strongest and most courageous policemen to arrest him. It is perhaps idle to base speculatfbns on his strength on that of a modern man.
It would probably be far greater in proportion to his size. The chimpanzee, which is somewhat smaller than a man, can twist a gunbarrel with its hands, and is stronger than two or three men. It is reasonable to suppose that a prehistoric man, who lived almost as a wild animal, would have a strength proportionate to that of an ape. In that case the giant would have had a truly fearful strength.
It is curious to note that legends of races of giants have been more or less accepted in all ages. In the Bible are mentioned the Anakimites, the last of whom, Og, the King of Bashan, was slain by Moses. Then there were the Cyclops, of Greek mythology. Dr. Schliemann has discovered remains of gigantic buildings which lead him to believe in the actual existence of a Cyclopean race. S. A. BINION, PH. D.

How the Prehistoric Man Would Look Today If Constructed By an Ethnologist.

The footprint is measured at 29″ which is the same size as the sandal currently located on display in a Nevada Museum.

This article of a Giant Ichnite Fossil in Quatsino, British Columbia, Canada was found by Giant Researcher Tess Cabrera, and first posted to the website Real Giants