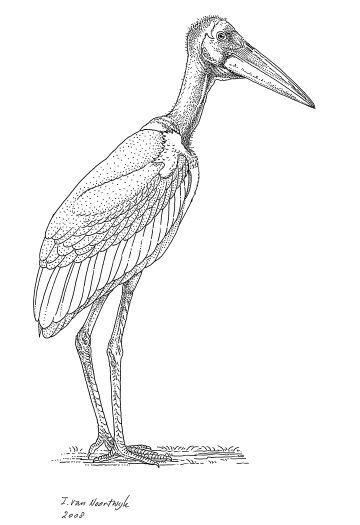 The new species of stork, named Leptoptilos robustus, reached 6 feet in height and weighed an estimated 36 pounds, researchers say, making it much heavier and taller than living stork species such as the related Marabou stork, which can reach 20 pounds and stand 5 feet tall.

Leptoptilos is a genus of very large tropical storks. Two species are resident breeders in southern Asia, and the Marabou Stork is found in sub-Saharan Africa.

The finding, reported in the Zoological Journal of the Linnean Society, also helps explain how prehistoric wildlife adapted to living on islands. [Meijer HJM & R A Due (2010). “A new species of giant marabou stork (Aves: Ciconiiformes) from the Pleistocene layer of Liang Bua, Flores (Indonesia)”. Zoological Journal of the Linnean Society 160: 707–724.]

I hate this place. This zoo. This prison.

Palaeontologist Hanneke Meijer of the Smithsonian National Museum of Natural History in Washington made the discovery with colleague Rokus Due of the National Center for Archaeology in Jakarta, Indonesia. They found fossilised fragments of four leg bones in the Liang Bua caves on the island of Flores. The avian fossil bones are between 20,000 to 50,000 years old, they say.

Around 15,000 years ago, the climate of Flores went from dry to being wet, which may have been enough to drive many of the island’s species to extinction, the researchers say.

Perhaps the “cranes” were ancient giant storks? There is an ample fossil record of one example of this genus, Leptoptilos titan (Notopuro Middle/Late Pleistocene of Watualang, Java) being hunted by prehistoric humans, and being truly gigantic. 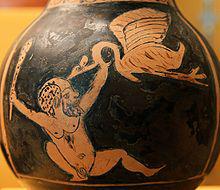 A person fighting his nemeses the cranes. From the Nuremberg Chronicle (1493). 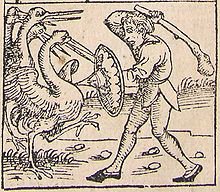