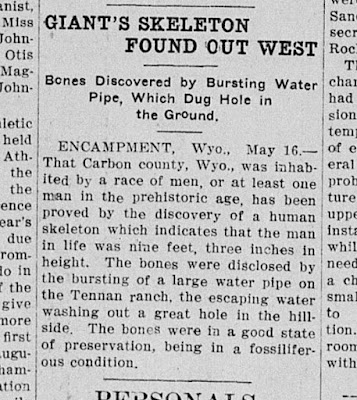 Bones Discovered by Bursting Water Pipe, Which dug hole in the Ground.

ENCAMPMENT, Wyo., May 16. – That Carbon county, Wyo., was inhabited by a race of men, or at least one man in the prehistoric age, has been proved by the discovery of a human skeleton which indicates that the man in lifewas nine feet, three inches in height. The bones were disclosed by the bursting of a large water pipe on the Tennan ranch, the escaping water washing out a great hole in the hillside. The bones were in a good state of preservation, being in a fossiliferous condition.

Here we have a skeleton that is NINE FEET THREE INCHES in height. Because a skeleton is porous it loses height, it shrinks. So this person when alive was likely NINE AND A HALF FEET (9′ 6″). He is almost 7 inches taller than Robert Wadlow, if that puts it into perspective.