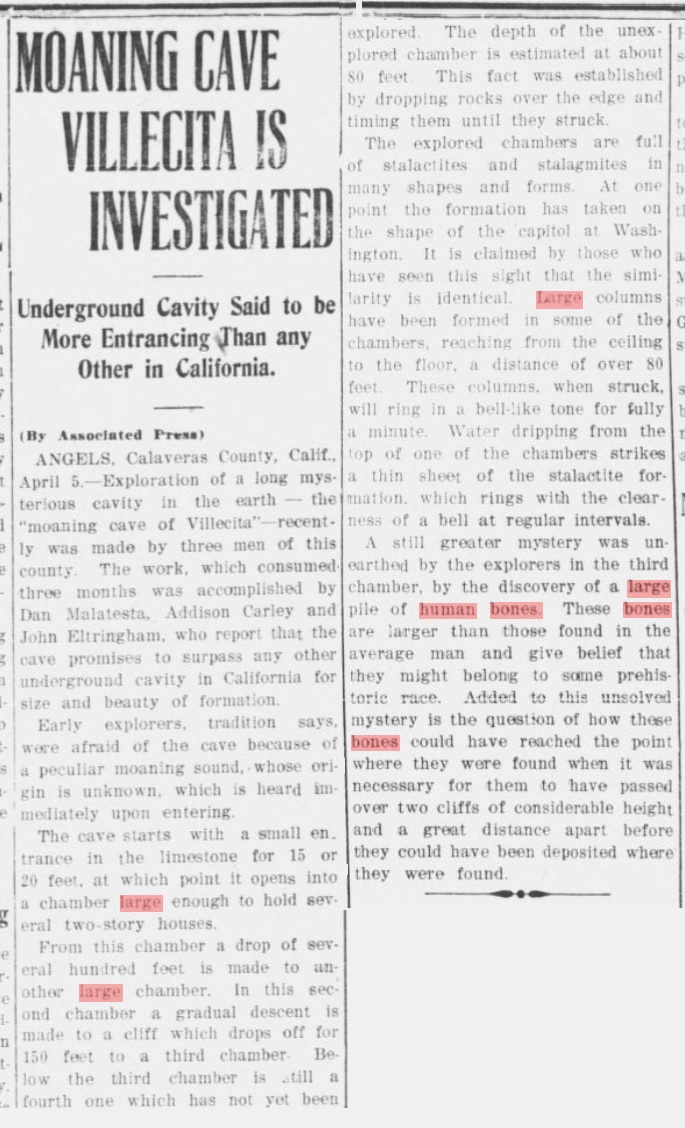 M0ANING CAVE
V1LLECITA IS INVESTIGATED
Underground Cavity Said to be More Entrancing Than any Other in California.
(By Anftorlated Ptm
ANGELS. Calaveras County, Calif., April 5. Exploration of a long mysterious cavity in the earth the “moaning cave of Villecita” recently was made by three men of this county. The work, which consumed’ throe months was accomplished by Dan JIalatesta. Addison Carley and John Eltringham, who report that the cave promises to surpass any other underground cavity in California for size and beauty of formation.
Early explorers, tradition says, wore afraid of the cave because of a peculiar moaning sound, whose ori-1 gin is unknown, which is heard ini- int.uiat,-,j ui,,, .,lw.b The cave starts with a small en.trance in the limestone for 15 or
20 feet, at which point it opens into a chamber large enough to hold several two-story houses. From this chamber a drop of several hundred feet, is made to another large chamber. In this second chamber a gradual descent is made to a cliff which drops off for 150 feet to a third chamber Below the third chamber is ..till a fourth one which has not yet been
explored. The depth of the unexplored chamber is estimated at about SO feet. This fact was established by dropping rocks over the edge and timing them until they struck.The explored chambers are fu’.l of stalactites and stalagmites in many shapes and forms. At one point the formation has taken on he shape of the capitol at. Wash-ngton. It is claimed by those who have seen this sight thai the simi-irity is Identical. Large columns have been formed in some of the diambers, reaching from the ceiling o the floor, a distance of over 80 feet. These columns, when struck, will ring in a hell-like tone for fully t minute. Water dripping from the op of one of the chambers strikes :i thin sheet of the stalactite formation, which rings with the clear
ness of a bell at regular intervals. A still greater mystery was unearthed by the explorers In the third chamber, by the discovery of a large pile of human bones. These bones ire larger than those found in the average man and give Delier tnat hey might belong to same prehistoric race. Added to this unsolved
mystery is the question of how those bones could have reached the point
where they were found when it was necessary for them to have passed
over two cliffs of considerable height and a great distance apart before
they could have been deposited where they were found.