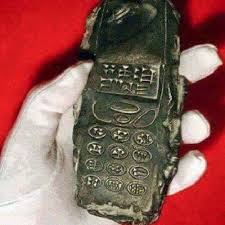 According to reports, during archeological excavations at Fuschl am See, Austria, researchers unearthed a mysterious artifact from the thirteenth century with cuneiform writing that strangely resembles a cell phone. This type of writing is typically found in modern-day Iran and/or Iraq. What a device like this with Cuneiform writing is doing in Austria is something that no one is able to fully understand or explain. Regrettably the information about this ‘sensational’ discovery is limited.

There are two things that just don’t add up. First of all discovering anything that resembles cuneiform writing in Austria is an extraordinary finding since great distance separated Austria and Ancient Mesopotamia, so it is a true mystery how the object ended up in Europe. According to reports, this is the most distance ancient cuneiform inscription ever discovered, that is if we look past the Fuente Magna Bowl from South America which apparently also has cuneiform writing carved on it. Some people theorize that this mysterious artifact was purchased in the distant past on am Ancient Mesopotamian marketplace and then transferred to modern day Austria.

Secondly, and the most mysterious part of the finding is in the fact that the objects eerily resembles a modern-day cellphone. You can clearly make out the 9 ‘keys’ in the lower part of the artifact which are positioned in a way mimicking the keys on a cellphone.

Obviously, we cannot avoid and consider the possibility that this artifact is a hoax. Finding something like this is more than sensational and points to the possibility that its creator could have seen a similar device in the distant past. What does this mean? Well, it means that it is possible that in the distant past, someone saw something that resembled a communication device like a mobile phone and decided to recreate the device in stone.

Most of you will remain skeptical about the discovery, and trust me so do I.

The fact that there is little to no information about the discovery anywhere online could point towards this discovery being an elaborate hoax. However, what if it isn’t a hoax and the reason why no one has talked about this discovery is because of media displaying selective information only?

Just imagine the chaos a discovery like this would cause among the archeological community if the discovery turned out to be true?

While there are numerous discoveries which have been made on our planet that question mainstream history, most of them are cast into the shadows by selective media and mainstream scholars who cannot understand and explain their origin which tends contradict popular beliefs about the past of human civilizations.

We would love to know more about the item, and if you know what it is, where it comes from and have more details about it, please let us know by sending us an email or message on social networks.