Archaeologists in Germany uncover a strange tomb. I which a Giant with a witch and horse were also buried. Outside of a cemetery in Thieben, a tiny Hamlet in Germany. A burial tomb was discovered with two bodies next to one another that of a Giant and a witch. In Biblical lore a Nephilim is the offspring of an Angel and a witch, a witch (the original) witches were taught magic directly from fallen angels. The Angels picked the women with the fairest skin meaning the lightest. As Cain’s descendants had an adversion to the sun because of the curse God has placed upon them. A mark was left on the DNA of Cain’s Lineage. This Mark was a blessing and a curse as it provided protection from death. The Angels bred out the descendant of Cain by taking their women. So it doesnt surprise me at all to see a giant and this red headed witch in accompaniment.
It is believed that these go back to the Merovingian era from the 500 – 751 century. 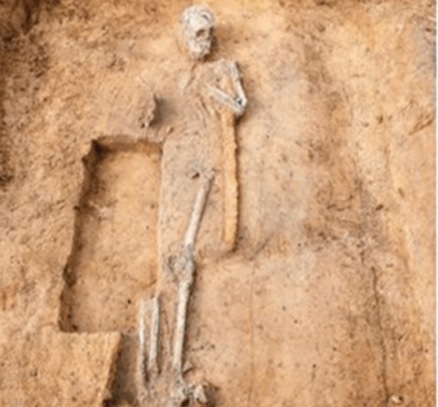 He was a Giant at seven feet tall in death it is likely that the skeleton had shrank up to 3 inches, as bones are porous and hollow, they dry out and shrink considerably over time. The archaeologists describe him as a “very tall man” and are reluctant to report that he was more than two metres in height. Some say “about two metres” instead of reporting the actual height which is a common deceptive practice.
The remains of the giant man are probably those of a warrior, perhaps a leader. In his left arm he holds an iron sword, on his right side there are remains of a lance. His clothes were girded and closed with a brooch,” says Friederich. “The horse graves were probably not directly related to the dead,” she adds.
To date there are only 15 basketball players in the NBA that would have been taller since the beginning of the league.
The distribution of 7 footers in modern times is 1 in 2.3 million.
There are only about 3090 total out of 7.8 billion people in the world.
A sword and n the right side the remains of a spear was found in close proximity, beside the body he was clearly defending the lady, his wife.

She was bound and had an iron rod hammered into her chest indicating that she was a witch at the time. This may have been a failed rescue attempt.
The Bible says the angels took all whom were fair, so it may be the case that bindings may have been the giant’s way of controlling for procreation.​ “It seems that she was buried in this way so that her soul would not abandon the tomb,” Friederich added. “Reasons for this may be that she was disabled or malformed, had special, perhaps inexplicable and thus frightening abilities, or that she was simply regarded as a witch.”
She was 18 years old at the time of her death and was about 18 years old when she died.

There were 3 horses also uncovered by the entryway of the tomb, who knows what spell was cast upon them.